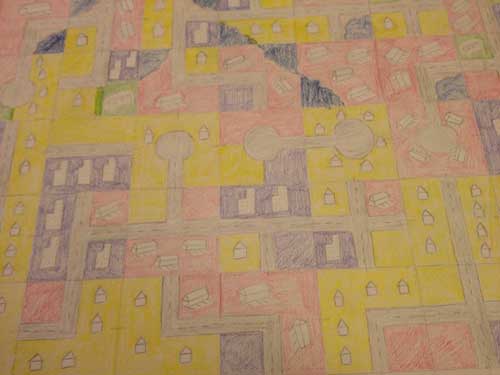 A few years ago I designed a game called Mad City. It was my first ever published game. I loved the game and it got great reviews when it came out, so when I had the chance to revisit the design, I jumped at the opportunity. Cosmic Factory, from Gigamic, is a new version of Mad City, but it is much more than just pretty art put on an old game. I told myself that a new version had to be a completely new game, just using the same base mechanism of building your ‘city’ as a one minute puzzle.

The first task was shortening the game. While Mad City wasn’t a long game, we felt that making the game an even quicker experience would give people the feeling of wanting to play again back to back. My game FUSE has been popular partly because the game is so quick to play, and people always want to play again right away. We tried several different methods, but the best was simply making the game a consistent five rounds of play. Mad City continued until a player reached 100 points, and this would usually take ten or more rounds. Cutting the game down to five rounds kept everything tight, and every round was important. 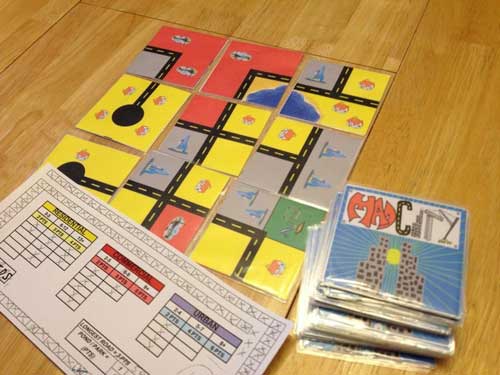 Making the game only five rounds long brought a new problem though. In Mad City the tiles were randomly distributed to players, and it was possible to have a round where you didn’t get the features that you needed on tiles. That was fine in a game that lasted ten plus rounds since it all evened out by the end, but with only five rounds to play it was more important that you had some control over your tiles. The development team at Gigamic suggested using a draft to pick your tiles instead of just a random draw, and it was a great idea. After playing a few times with the draft though, I realized that I was always just taking the same types of tiles, and not really making any decisions. There were features that were simply better than others. While I try to come up with new ideas for any problems that I encounter in a design, in this case I went with an old favorite….Knizia Scoring. By saying that you’ll score separately for each feature, and your final score is your lowest feature, it made all of the tiles important. You would draft differently based on the current state of the game, which was exactly what I wanted. To add that twist that I’m always looking for, you’ll also score bonus points for certain things in the game, which are tracked by a star token. Your final score is your lowest feature added to your star bonus points. This allows players to have different paths to victory, and meaningful choices every round.

The biggest change to the game was also the most painful. Surprisingly, it was also the change that I made on day one when I decided to redesign the game. Mad City had two versions in the box: a Base Game and a Standard Game. The base game was added for younger players, or maybe as a training mode for new players, but the standard game was meant to be the actual game. It offered a scoring system where you had to unlock your scoring in the different areas before you actually scored points for them. It was a fun system, and I loved it, but my first decision in the redesign was to cut it out of the game. I wanted a more accessible game that could reach a wider audience, and I felt like that might be a complication. The problem with cutting it though was that the scoring is what offered the variety from round to round, so you weren’t always looking at the same things and making the same decisions every round. As soon as I started thinking about ways of offering variety from round to round, I had the idea of what are now called Kaos Cards. Each round a card is revealed and it changes the rules for that round only. Sometimes you’ll be building in a different configuration, sometimes you’ll be building your ‘city’ for your opponent to score, sometimes different areas will score differently, etc. It makes each round a new puzzle with new elements to think about, and it keeps the game exciting from beginning to end. 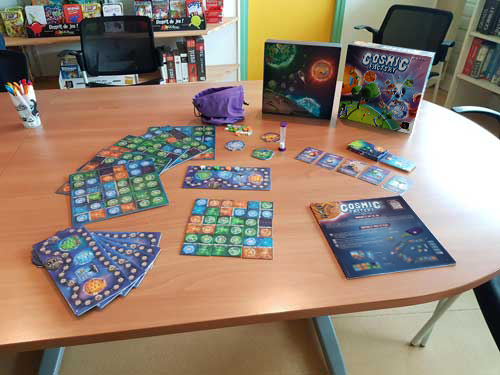 We knew we were going to need a new name and theme, and I had been thinking about it throughout the process, but I never came up with anything that I was thrilled with. The team at Gigamic came up with the space theme with the planets, and I absolutely love it. Paired up with the beautiful artwork by Sylvain Aublin, I am extremely happy with the final product. It’s both beautiful and functional, and fits the game perfectly.

So, whether you’ve played Mad City or not, give Cosmic Factory a try. It’s a brand new game, and one that I hope will appeal to a wide variety of players. Have fun in the Kaos!