Calaveras incident is the result of an old idea: the very first prototype was created in 2009, and was then called "Guilty". From a material and mechanical point of view, it had almost nothing to do with what it has become today. It was a much heavier board game, with pawns and many more cards, but the intention of the game was already there. I wanted to create an investigation game where, unlike usual, it is not a question of discovering by deduction a guilty person established in advance, but rather of trying to make someone else bear the guilt of the crime. 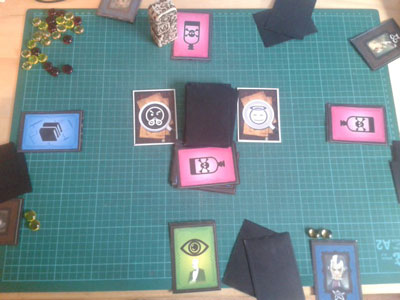 The prototype was not very good, I left it aside for many years. It was only in 2016, when I was trying to create a very simple investigation game with hidden roles, that this principle came to my mind. I started from scratch, trying to keep this idea strong, and sticking to the fact that it was only a game of cards, fluid and accessible as much as possible.

The basis of many investigation games, as mentioned above, is the deduction - the logical work of eliminating variables. But players most often play the role of the investigators, as in most detective novels. Here, the idea was that the players were all playing potential guilty person. I still wanted to use the deduction mechanism centrally... so I created a set of cards filled with criteria that made it more or less "innocent" or "guilty".

However, for the game to be playable by up to 6 players, I had to have a lot of cards, and the distribution of those cards was a problem for me: when a game is made up of many cards with few different card types, the risk of getting very specialized hands (with many identical cards) is statistically increased. I had to reduce the number of cards so that players could find more heterogeneous hands. It was during one of the sessions of my collective of Rennes authors, the GRAL, that Arnaud Ladagnous suggested the brilliant idea of removing the neutral variables (places) from the notion of guilt and innocence. So I was able to reduce the number of cards to about 50, I placed the "suspect" and "innocent" areas in the center of the table, and the rest of the gameplay was the result of that decision.

In the end, we find the deduction mechanism dear to investigative games - some criteria are innocent, others not - but here, rather than working towards a progressive resolution towards the revelation of a culprit, it is rather an investigation full of twists and turns, where dirty tricks are commonplace...